MIKROKOSMOS Entertainment Ltd was created at May 2004 in order to establish a new alternative
art-house cinema in the centre of Athens. The Cinema opened in October 2004 giving to the Athens-
based film buffs the opportunity to enjoy documentaries such as “The Story of the Weeping Camel”,
“My architect”, “Darwin’s nightmare”, “What the bleep do we know”, “The take”, “Iberia”, “Aliente”,
etc. We also have screened films like “Coffee and Cigarettes”, “The Downfall”, ”Cache”, “Samsara”
,“Machuca” , “Last days”, “Something like happiness”, “The free will”, “Destricted” , “Shortbus”,
“Control”, “Taxidermia”, “Buzz”, “Mala Noche” “En Soap”,”Dead Man Shoes”, “11 th Hour”, “La antena”
“It’s a free world”, “Waltz with Bashir”, “The hunger”, “Yo” , “Sex drugs &amp; rock’n’roll”, “Bibliotheque
Pascal” and many more. We are also members of Europa cinemas network from 2005.
We are also trying to give the opportunity to the independent Greek cinema to communicate with the
wider audience; occasionaly we manage to succeed in the box office, with art-house films like “Soul
Kicking” (screened in Cannes Director’s Fortnight 2006), “Tsiou”, “Parvas”, “Dogtooth”, “Wandering
soul”, “Attenberg” and “PARK”.

END_OF_DOCUMENT_TOKEN_TO_BE_REPLACED 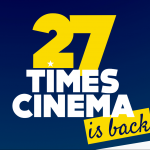